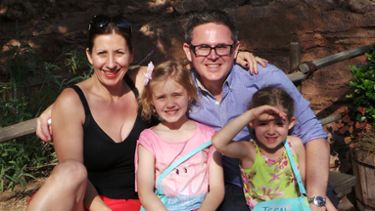 Originally from the UK, Iain has been living and working Down Under for several years and has recently bought a home, a symbol of putting down roots.

Iain Haywood and his wife, Kate, had always wanted to live and work abroad for a while. But when a job ad from an Australian retail chain that matched his profile landed on his desk in 2011, Iain and Kate had to think quite a few things through before they went ahead and packed up their belongings to move from Derbyshire halfway around the planet to Melbourne. "Leaving Medela was a really tough call to make," Iain recalls. In just 12 months of working for Medela UK, he had come to identify very closely with the company and its values.

In the end, the promise of new adventures in another country was impossible to resist. And so, with his wife and daughters Isabelle (eight) and Jessica (six) in tow, the marketing and sales specialist left the UK for a new job, a new employer, a new town and a new continent. It turned out to be the right move, in more ways than one – two years into their stay an opportunity came up to re-join Medela in Australia. "It's great to be back," Iain enthuses as he talks about his role as National Sales and Marketing Manager. He now plans to capture the Australian market, drawing on his 20-plus years of marketing and sales experience and the support of his dynamic team.