22 April 2016
Love and optimal nutrition are especially important for babies to thrive. Breast milk as a food combines both for healthy infants: close contact with mother and a supply of nutrients and protective substances tailored to the child's individual needs. Breast milk and skin-to-skin contact at the earliest possible opportunity also make a decisive contribution to a healthy life for preterm babies. Nine scientists from five countries discussed the results of the latest scientific research on the importance of breast milk and implementation of findings in clinical practice with more than 400 participants from 41 countries at the 11th International Breastfeeding and Lactation Symposium in Berlin organised by Medela.
Share this content 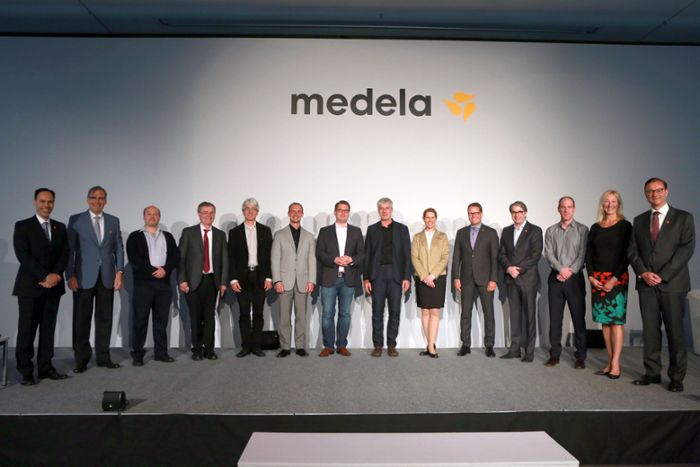 The first block of presentations focussed on the unique nature of breast milk. For A Professor Donna Geddes, University of Western Australia, Perth, pregnancy and the first years of life are key to prevention of non-transmissible, chronic diseases in later life. Above all breast milk, with its nutrient content precisely tailored to the infant's needs and a unique diversity of bioactive ingredients, reduces the risk of obesity in later life. Children who are breastfed have a lower risk of developing a metabolic syndrome in later life, which in turn increases the likelihood of developing diabetes and cardiovascular diseases. Furthermore, breast milk positively affects brain development, the occurrence of allergies, bone density and fertility. What the mother eats during breastfeeding lays an important foundation for the child's preferences: if she eats a wide variety of foods with lots of vegetables, the child will be more receptive to new foods. This is why Geddes expressly encourages all mothers to breastfeed: 95 percent of women are capable of producing enough milk to feed their child.

A Professor Lars Bode, University of California, San Diego, USA, stressed that oligosaccharides in breast milk are much more than just food for intestinal microorganisms. The composition of the 150 to 200 oligosaccharides known to be present in breast milk so far is unique to every woman. They promote colonization of the child's intestine by beneficial microorganisms and protect the baby against infections caused by bacteria, fungi and parasites which adhere to the mucous membranes. But it is not just full-term infants who benefit from the polysaccharides in breast milk. Studies indicate that the oligosaccharide disialyllacto-N-tetraose (DSLNT for short) in breast milk helps to prevent necrotising enterocolitis in preterm babies.

Important developments occur in the brain in the first five years. This includes maturation of the myelinated white matter, which plays an important role in message transmission. The team around A Professor Sean Deoni, Brown University, Providence, USA, investigated how exclusive, early breastfeeding, mixed feeding with breast milk and formula and feeding with formula only impacted brain development. To do this, they scanned the brains of 133 full-term, healthy babies and infants aged 10 months to 4 years, using what is known as quiet magnetic resonance tomography (MRT). The white brain matter was more developed in late-maturing areas of the brain where exclusively breastfed children were concerned. In addition, breastfed children's visual abilities, linguistic expressiveness and language comprehension were better. These results support the finding that feeding with breast milk, which is rich in lipids and cholesterol, amongst other things, promotes brain development.

The symposium's secondary focus was the latest recommendations for evidence-based practice. Professor Matthias Keller made a case for the needs of preterm babies and their families being central to neonatal care. Initial results from the family-integrating NeoPAss® care pathway developed at the Dritter Orden paediatric clinic in Passau between 2012 and 2014 supported his plea. Since this care pathway was introduced, preterm mortality and morbidity had been reduced by 50 percent. Parents who, as the key reference person, are involved in care from the outset are much more confident when dealing with their children. At the time of discharge from the clinic, almost all the children were breastfed. It was possible to shorten the length of stay on the NICU and reduce the occurrence of hospital-acquired infections by 80 percent compared with the German average. Detailed information about NeoPAss® can be found online at www.neopass.de.

Mastitis is one of the most common reasons why women stop breastfeeding their child prematurely. Professor Juan Miguel Rodríguez, Complutense University of Madrid, Spain, explained the role which changes in the breast's microbial colony play in various forms of mastitis. A subacute form of the disease is much more common than acute mastitis. It leads to pain while breastfeeding, as the milk ducts are colonised and narrowed by pathogens, but is not accompanied by typical acute mastitis symptoms. A bacterial culture should therefore be used for diagnosis and targeted treatment of the disease. It provides an insight into the underlying bacteria and any resistance to antibiotics that may be present. The use of probiotics may represent a new approach to treatment, as certain lactobacilli and bifidus bacteria can help to prevent and treat mastitis.

If, for example, the milk from a preterm baby's own mother is not available to feed it, the first choice is donor breast milk. At most human milk banks, breast milk is sterilised using pasteurisation with the holder's help. The disadvantage of this heat treatment is that valuable bioactive substances, such as immunoglobulins, enzymes and hormones, are also fully or partly deactivated. Dr Susanne Herber-Jonat reported on another way. On the Neonatal ward at Ludwig Maximilian University, Munich, even very small preterm babies are given unpasteurised donor breast milk. This has reduced the occurrence of infections and cut the frequency of necrotising enterocolitis from 3.1 percent to 0.3 percent.

The third block of presentations homed in on the value of breast milk in the NICU. Even before and during birth, babies come into contact with bacteria in the amniotic fluid and birth canal. These microorganisms and the bacteria in breast milk play a significant role in colonising the infant's gastrointestinal tract. The milk from the baby's own mother is particularly important for this, even if it contains too little energy, protein and minerals for preterm babies. Professor Josef Neu, University of Florida, emphasized that neither donor breast milk nor formula offer protection against necrotising enterocolitis which compares to that provided by breast milk from the baby's own mother. If it is possible to obtain even small quantities of breast milk from the mother in the first few days after birth, it is essential that this is also given as a supplement to the donor milk.

Professor Per Torp Sangild, University of Copenhagen, Denmark, explained that the components in breast milk are extremely sensitive to processing and heat treatment. Investigation conducted on preterm piglets showed that colostrum protects against necrotising enterocolitis and diarrhoea and has a beneficial effect on growth, regardless of species. Whether breast milk benefits the offspring's health also depends on the donor's lactation stage and how the milk has been processed. In the investigations, the slow provision of breast milk as early as possible was superior to late and rapid feeding.

Thomas Kühn, Perinatal Centre, Vivantes Klinikum Neukölln, Berlin, emphasized that a rethink had taken place in NICUs. Treatment no longer focussed on pure survival of the very smallest babies, but on their long-term development. In parallel, there had been a paradigm shift: nowadays it is primarily high-risk children who are given breast milk. When enriching breast milk with energy, protein and minerals, attention must be paid not only to the children's growth, but also physical composition. Two French cohort studies have also shown that despite unsatisfactory growth during the hospital stay, preterm babies fed only on breast milk were superior to their non-breastfed peers at the ages of two years and five years. The breastfed children achieved better psychomotor results and higher values for weight, height and head circumference. Prosperity and parents' education also influence the child's development though. Kühn advises a personalised recommendation of whether breast milk should be enriched or not for the period after the hospital stay.

Medela, headquartered in the Canton of Zug, Switzerland, was founded by Olle Larsson in 1961. Today the company is run by his son, Michael Larsson. Medela has two business units: "Human milk", which is a leader in the development and production of breastfeeding products and all-in-one solutions, and "Healthcare", which engineers and manufactures high-quality medical vacuum technology solutions. Medela conducts basic research in partnership with leading scientists, medical professionals and universities, and uses the research results in the development of its products. Medela has 18 subsidiaries in Europe, North America and Asia, and together with independent partners distributes its products in more than 100 countries. The company employs over 1,600 staff worldwide, 400 of whom are located in the Canton of Zug, Switzerland.